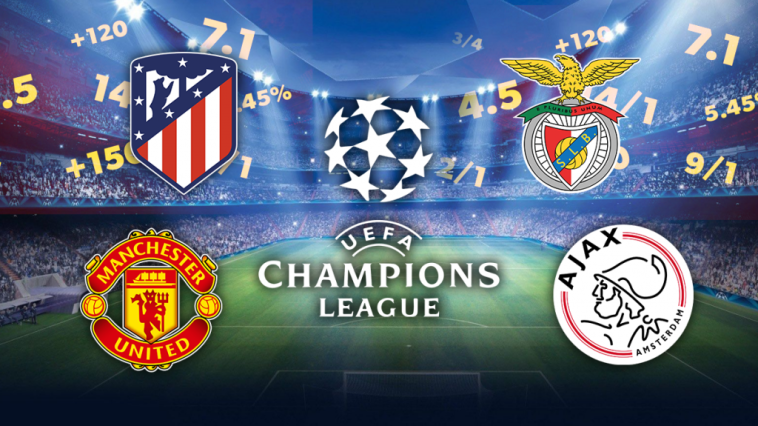 The first leg of the UEFA Champions League Round of 16 has been great, and there are still a few games left. Atletico Madrid welcomes Manchester United while Benfica will host Ajax on February 23. I explore both matches and share my Champions League Last 16 predictions for Wednesday below.

The post includes the latest odds for the main betting markets, my analysis for both Champions League 1st leg ties, and my recommended Last 16 picks.

Let’s begin my UCL predictions for Wednesday with the clash between Atletico Madrid and Manchester United. Both sides are underperforming in their domestic leagues, but they are still alive in the Champions League, and a good run there is on the cards.

A positive result in the opener will be critical for both sides. The stakes in the upcoming match are high, and I expect a lot of tension. Here’s what the top sites for soccer betting online expect.

The Spanish hosts are slight favorites going into this match, but the overall expectations are for a close encounter. That’s hardly a shocker considering the inconsistent performances of both Atletico Madrid and Manchester United.

Let’s take a deeper look at both sides and the team news before I share my Atletico Madrid vs. Man Utd prediction for Wednesday.

The past few weeks have been turbulent for Atletico Madrid. The team was involved in three uncharacteristically wild matches in Spain. The clashes against Valencia, Barcelona, and Getafe featured a total of 18 goals and two red cards for Atleti!

That’s not exactly the disciplined performance we’re used to under head coach Diego Simeone. The fragile defense has been the underlying problem for Atletico this season.

The team has conceded 34 goals in 25 La Liga matches which puts it in the bottom half of the table defensively. You can’t expect to allow so many goals and go all the way in the Champions League. Atletico has to return to the sturdy performance of previous seasons to compete with the best in Europe.

The good news is that Man Utd is not in that elite group either. The English side’s vulnerable defense will most certainly leave space for Atletico to exploit. The Spaniards have the means to punish the opposition too.

Diego Simeone will miss a few players for this one which is a bit of a concern, though. Yannick Carrasco is suspended, while Daniel Wass and Matheus Cunha are probably out for fitness reasons. Thomas Lemar could be back after sickness, and Antoine Griezmann should be available.

Atletico Madrid have the firepower to score in this match, but the inconsistent defense doesn’t convince me. I won’t be shocked if we see another wild game with plenty of chances for both sides.

I’m not sure what to think about Manchester United right now. The team seemingly has a bunch of problems on and off the pitch, but the results have been solid recently. Just take a look at this stat.

Interim coach Ralf Ragnick made the Red Devils tougher to beat. The team’s last defeat in regular time was way back in January 3.

The German also improved many of his offensive players. Jadon Sancho and Paul Pogba looked relaxed and happy. Ronaldo just had one of his best games of 2022 against Leeds, and Bruno Fernandes is firing again.

The atmosphere is better as a whole, but I’m still not convinced. Man Utd had plenty of lucky moments in some of the most recent victories.

The defense has struggled, and many are calling for Harry Maguire to be removed from the starting lineup.

The English side is certainly vulnerable at the back. I don’t trust United to keep a clean sheet in this one, but the team news is great. Only Cavani is a doubt, while everyone else is fit. This gives Ragnick a lot of different weapons to pick from.

Before I started digging for my UEFA Champions League predictions for Wednesday, my gut feeling was that Atletico Madrid should be slightly favored in this match. That’s exactly how the top betting sites view this one, but I’m not convinced anymore.

Atleti’s problems at the back and Man Utd’s ability to grind results changed my mind. I expect a favorable outcome for the English side in this one. The odds of +225 for the visitors are good enough for me to give it a shot.

Backing the over 2.25 at -102 is also one of the better Champions League picks for Wednesday. And yet, I feel adventurous, and I prefer the higher price.

The second clash on February 23 should be more straightforward, at least on paper. Most UEFA Champions League Wednesday predictions you can find are heavily in favor of Ajax Amsterdam.

The Dutch champions were amazing in the group stage, winning every single match. Let’s see what the bookies expect for the clash against Benfica.

The first leg will take place in Portugal, but Ajax is still the favorite. That’s to be expected after the sublime performance in the group stage of the competition. The Dutch side has been great throughout the season as a whole, and Benfica is not on the same level.

And yet, the home advantage could provide a boost for the side. Here are my thoughts on both teams and a quick look at the missing players.

The slim hopes Benfica had for winning the Portuguese League evaporated in February. The team lost against Gil Vicente at the start of the month and drew Boavista several days ago. The gap to the top is way too big now, so the league is out of reach.

In fact, the table suggests that Benfica will most likely finish third. The difference between the second and the fourth spot is just too big. That’s not what the team was hoping for, but it allows head coach Nélson Veríssimo to focus on the Champions League.

Let’s remember that his tactical masterclass in the group stages helped Benfica qualify for the knockouts at the expense of Barcelona. If he can find a way to neutralize Ajax’s potent offense, his team has a chance.

What bothers me is that Benfica’s last clean sheet came on January 21. The side is allowing way too many chances, and you can’t do that against Ajax. On the bright side, Benfica scores a lot of goals too.

The team will likely miss Haris Seferovic, Rodrigo Pinho, and Lucas Verissimo on Wednesday. The good news is that their replacements have been decent so far, so Benfica should be able to perform without the trio.

The 2021-22 campaign has been impeccable for Ajax up to this point. The team demolished the competition in the UEFA Champions League group stages, scoring 20 goals in only 6 matches.

The reigning champions are also leading the domestic league and just beat Vitesse 5-0 in the quarterfinals of the Dutch Cup.

You have to go back to December 12 to find the last competitive game Ajax didn’t win! The confidence of the side is sky-high. You can easily notice that in Sebastian Haller’s interview ahead of the Benfica clash.

The young star scored 10 goals in the group stage, and he wants more on Wednesday! The overall sensation is that Ajax is going to Portugal to win and kill the tie from the first leg. The team has no significant injuries, so that’s certainly on the cards.

I usually stay away from obvious Champions League Last 16 predictions. At the same time, the odds of -125 for Ajax to win the opening clash are just too good to skip.

The Dutch team is flying right now, and Benfica’s leaky defense is unlikely to change that. I expect a comfortable win for the favorite, and that’s my final pick.

I hope that my analysis and predictions for the Champions League Last 16 matches on Wednesday can help you make better betting decisions.

If you prefer to target the matches in-play, you should check this post with tips on live soccer betting. They can help you identify good opportunities and avoid some of the traps of in-game gambling.