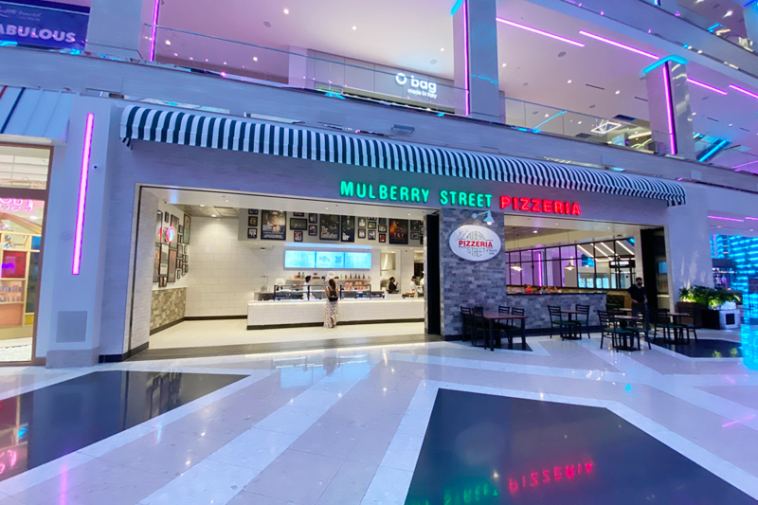 Mulberry Street Pizzeria opened on Sep. 17, 2021, but we only recently visited because we are very busy and important. We’re trying to look at the pizza restaurant, but can’t stop looking at the “O Bag” sign. How did we miss the earlier version, “D Bag”? Nobody tells us anything.

Mulberry Street Pizzeria is billed as a “Beverly Hills institution,” the original location opened in 1991.

The focus at Mulberry is New York pizza, and it was pretty good.

We tried a classic slice of pepperoni, as well as a Sicilian monster. The slices won’t win any awards, but will effectively handle your drunchies.

New York pizza has a thin crust, and we refer to it as “wet” (otherwise known as “soggy”) pizza, suitable for folding. It’s flavorful, but we like more dough.

There was a lot of dough in the Sicilian slice. Again, pretty good pie. It’s not just a slice, it’s a meal. Probably for two.

The restaurant is adorned with movie posters signed by friends of Mulberry’s owner, Richie Palmer. That autographed pic of the “Sopranos” had better be bolted down. The prices at Mulberry are about what you’d expect on the Las Vegas Strip. Putting “fresh” by certain things is a double-edged sword, in our humble opinion.

Vegas has lots of great pizza, so it’s tough to hit one out of the park given the competition. Mulberry Street Pizzeria is a viable option if you’re not in the mood for the mostly-Asian food court at Resorts World. Oh, and for whatever reason, nobody at Resorts World seems to have ice. Mulberry’s didn’t, and warm soda can tank a dining experience for us.

The food court restaurants at Resorts World don’t have ice, either. It’s so weird and one of the reasons we don’t visit the resort as often as we otherwise might, to be honest.

The restaurant is located near Zouk Nightclub, not far from the massive video globe in a promenade called The District (internally referred to as “The Spine”). Mulberry Street Pizzeria is one of the most easily accessible restaurants by foot from Las Vegas Boulevard. Perhaps you’ve heard of it. “Zouk” translates as “don’t rely on photo captions for information, use Google.”

That’s one of the Resorts World updates mentioned in the headline of this story, by the way.

Mulberry is also near the Stardust sign, recently removed and returned with a new base to deter asshattery. The sign is now flanked by cacti as an additional security measure. Attention drunk people: Do not mess with our sign replicas, thanks.

In the mood for more random Resorts World updates, we asked rhetorically? Las Vegas often gets a bad rap for having terrible art, and this is further proof that reputation is fully warranted. Something about how certain breeds of dogs are now fashion accessories, or whatever.

Here’s more about the art at Resorts World.

While Resorts World appeared to be moving toward paid parking, we were glad to see signs saying parking remains free. We try not to play favorites, but free parking is our favorite kind.

On the way in from the parking garage, we spotted construction of the resort’s theater entrance underway. It’s curtains for the posters featuring all the Resorts World headliners.

While not exactly an update, we got to finally drink and play at the very fancy lounge, Gatsby’s. Two words describe the decor of Gatsby’s: Balls. That may seem like one word, but balls tend to come in pairs.

We enjoyed it a lot.

The bar uses the “red light, green light” drink monitoring system, so keep playing to get those comped drinks. Drink monitoring is so prevalent now, we have difficulty mustering any outrage. Also, bartenders seem to like it, so there’s that.

The vibe at Gatsby’s was wonderful, but we hear the venue has a more energetic (translation: much louder) atmosphere after 10:00 p.m. Our biggest gripe had to do with comfort. The bar at Gatsby’s is beautiful, but brutal on the knees. This is probably due to the fact in a bar like this, video poker players aren’t the highest priority. Just a heads up if you plan to check it out. Today’s think you didn’t expect to see. Our knee.

There’s a lot more going on at Resorts World, so we’ll keep you in the loop as time and liver condition allow.

Ice scarcity aside, we’re a big fan of Resorts World, and it’s a must-visit the next time you’re in Las Vegas.

Highlights include the artwork (there’s a lot of it, and most of it’s better than the sexy robot), the high limit room, pool complex and the massive video screen on the side of the hotel tower. 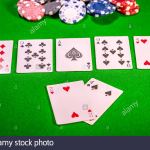 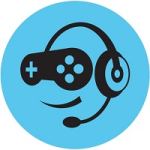